While Arslan and Daryun enlist Narsus’ help, Lusitania begins their siege in the royal capital of Ecbatana. Shapur is tortured by Bodin as an example for the “pagans” of Pars, but requests to be killed by one of Pars’ archers. Listening to his request, he is killed by a mysterious man, who is called by queen Tahamine to be rewarded for his feat. Meanwhile, Lusitania convinces the slaves of Pars to open the city gates for them, promising to make them free men. 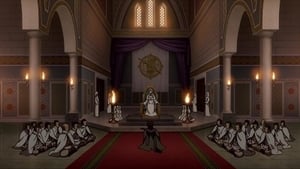